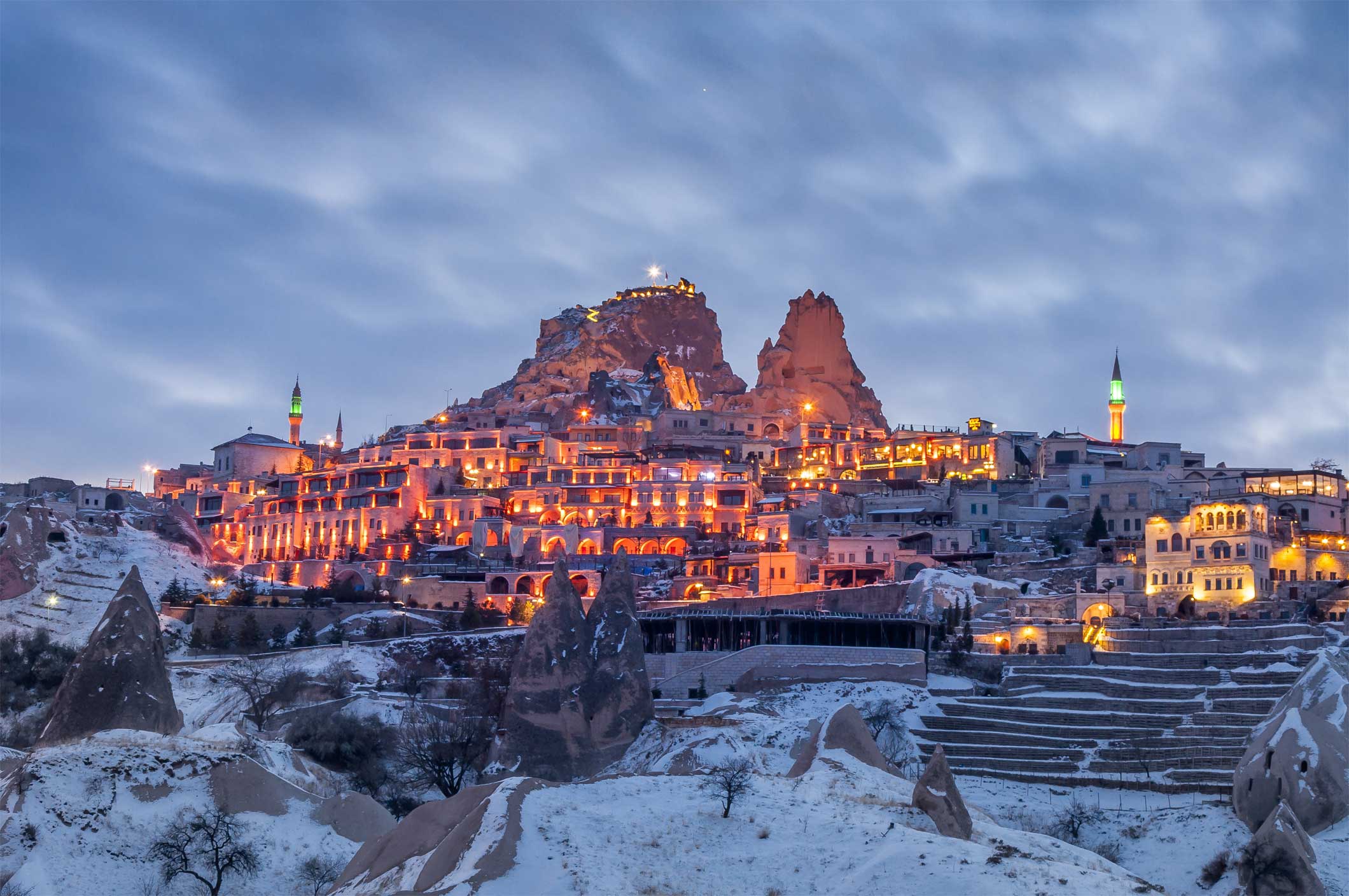 ITINERARY
Day 1 Cappadocia
Arrive to Istanbul and transit connection to domestic sector for your flight to Cappadocia.
After Landing Transfer to your hotel in Cappadocia, Dinner & O/N at the hotel.
Meals : Dinner (Hotel)

Day 3 Cappadocia to Istanbul  ( by flight )
Check-out from your hotel with your luggage, your tour will take you to Kaymaklı Underground city ; even though the whole city has not been completely opened, and since only 4 floors have been uncovered. It is accepted as the widest underground city of Cappadocia, among the explored ones. The number of the storage rooms in such a small area supports the idea that a great number of people resided here. Archeologists think that this could have been up to 3500 people. Then Transfer to Kayseri or Nevsehir Airport &  Flight to Istanbul. After Landing Tranfer to your hotel  O/N at the hotel.
Average Pick-up time: 09:00 Approximate Tour Duration: 05 hrs
Meals : Breakfast – Lunch (local)

Day 4 Istanbul
After Breakfast, Start your full day sightseeing ( Byzantian & Ottoman Relics Tour )
We begin our tour of the Sultanahmet district, the heart of old Istanbul, at Saint Sophia. Built by Emperor Justinian in the 6th century AD, this church is one of the marvels of world architecture. Its massive dome dominates the skyline of old Istanbul. It is famed for its mosaics, including glittering portraits of emperors and empresses. Next we visit the Blue Mosque, which owes its name to the exquisite tiles adorning its interior. Dating from the 17th century, it is the only imperial mosque with six minarets. The Hippodrome, the stadium of ancient Byzantium, held 100,000 spectators and featured objects from all corners of the empire. Of these, an Egyptian obelisk and a bronze sculpture of three entwined serpents from Delphi survive.Afternoon; we begin our tour at Topkapi Palace, which, from the 15th to the 19th century, was the principle residence of the Ottoman Sultans. We will visit the fabolous Imperial Treasury and the Baghdad Kiosk. Topkapı Palace is now a museum and has unrivalled collections of jewelry, including the Spoonmaker’s Diamond, the 3rd largest in the world, Ottoman court costumes and ceramics, notably one of the world’s finest collection of early Chinese ceramics, much of it gifts from other rulers. Interestingly, some of the ceramics have a special glaze that was said to change color in the presence of poison. We also visit the Imperial Armory, displaying centuries of Ottoman weaponry. But perhaps the loveliest features of Topkapı Palace are its courtyards with their ancient trees, and it is easy to imagine the sultan strolling here far from the cares of state and empire.  The last stop, Grand Bazaar, was the commercial heart of the old city and its 4,000 shops are full of treasures – including carpets and kilims, silks, jewelry, ceramics, icons, and leather goods. Wandering through the Grand Bazaar, indulge in some shopping, Ottoman style
Average Pick-up time: 07:45-08:15 Approximate Tour Duration: 08 hrs
Meals : Breakfast – Lunch (local)

Day 5 Istanbul
After Breakfast, start your Half Day Spice Market & Bosphorus cruise tour;
CITY WALLS The first breach of the walls was by the Fourth Crusade in 1204, the second by the cannons and troops of Sultan Mehmet the Conqueror in 1453.
DRIVE BY BUS TO GOLDEN HORN As a natural and extremely secure harbor, the Golden Horn has played an important role in the development of Istanbul. The inlet separates the European shore into two. It is approximately 8 km long, and the widest part is the entrance from the Bosphorus. Two streams drain into this inlet at its far end.
SPICE BAZAAR (EGYPTIAN BAZAAR) The air here ıs filled with the enticing aromas of cinnamon, caraway, saffron, mint, thyme and every other conceivable herb and spice.
BOAT TRIP ON THE BOSPHORUS An amazing cruise between the two continents, EUROPE and ASIA, along the Bosphorus by the Dolmabahçe and Beylerbeyi Palaces, wooden villas and mansions up to the Rumeli Fortress.
THE RUMELI FORTRESS(FROM THE SEA) (NO INTERIOR VISIT)
İstanbul had been besieged many times before Mehmet the Conqueror took the city in 1453,but it managed to defend itself with the help of the Roman city walls.
Average Pick-up time: 07:45-08:15 Approximate Tour Duration: 04 hrs
Meals : Breakfast only

Day 6 Departure
After breakfast, Transfer to airport for your flight back to India.
Meals : Breakfast only