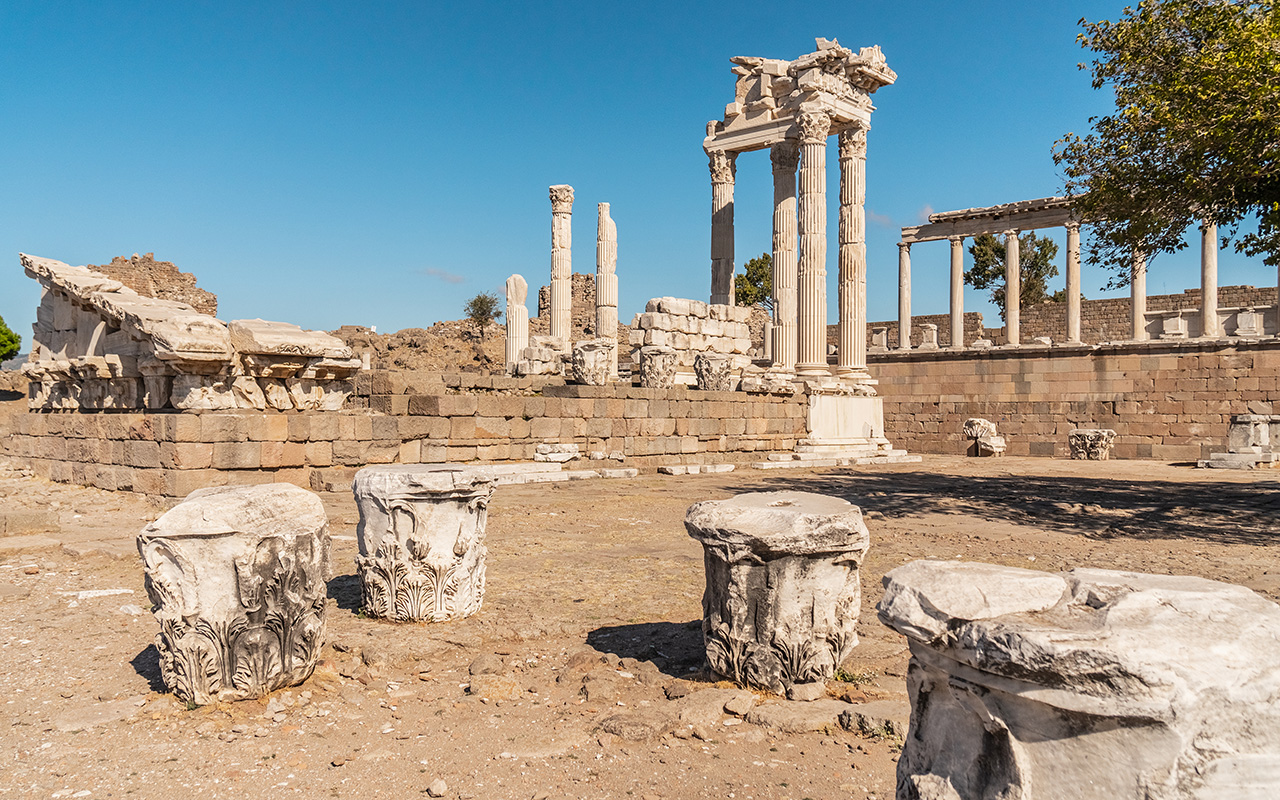 DAY 1    Turkey Border / Canakkale
Arrive to  Greek-Turkish border where we’ll board our Turkish motorcoach and continue on to Gallipoli (name derives from a Greek term meaning “Beautiful City”) to explore battlefields including Anzac Cove, Kabatepe Museum, Lone Pine Australian Memorial, Johnston’s Jolly (Turkish and Allied trenches and tunnels), and the Nek and Chunuk Bair New Zealand Memorial. After a full day and much to think about, we’ll drive to Canakkale for dinner and an overnight stay. Canakkale is the nearest major town to the site of ancient Troy; the “wooden horse” from the 2004 movie Troy is exhibited on the seafront. C/in to the hotel dinner & O/N at the hotel.
Meal Plan : Dinner ( Hotel )

DAY 2    Canakkale, Pergamos & Ayvalık
After breakfast Continue our program, The fates have given mankind a patient soul (Homer, Iliad, XXIV, l. 49). On our way to Ayvalık, which lies on the Aegean Sea, we’ll see Troy, an ancient city, both factual and legendary and best known for being the focus of the Trojan War described in the Iliad one of the two epic poems attributed to Homer; Alexandria Troas, also an ancient city situated on the Aegean Sea and visited at least twice by St. Paul; and the small historically rich town of Assos where Paul visited after he left Alexandria Troas (Acts 20:13-14). We will also visit the other Church of Asia Minor in Pergamos as well as explore the Acropolis of this Hellenistic city. For dinner and an overnight stay, we’ll continue to Ayvalık, situated on a narrow coastal plain surrounded by low hills to the east that are covered with pine and olive trees. Ayvalık also has two of the longest sandy beaches of Turkey. Hotel  in Ayvalik. Dinner & O/ N at the hotel.
Meal Plan : Breakfast, Dinner ( Hotel )

DAY 3    Bergama, Sardis, Philadelphia & Pamukkale
Write on a scroll what you see and send it to the seven churches: to Ephesus, and to Smyrna, and to Pergamos, and to Thyatira, and to Sardis, and to Philadelphia, and to Laodicea (Rev 1:11).
Sardis is an ancient city whose importance was threefold: first to its military strength, secondly to its situation on an important highway leading from the interior to the Aegean coast, and thirdly to it’s commanding the wide and fertile plain of the Hermus. As important as Sardis may have been, the city was berated by John for its facade of strength and its notoriously soft and fainthearted population (Rev. 3:1-6). Today in Sardis, we will explore the massive scale of the Temple of Artemis, the white marble royal road, the impressive gymnasium, and the synagogue, where, since 1958, both Harvard and Cornell Universities have sponsored annual archeological expeditions. These excavations unearthed perhaps the most impressive synagogue in the western diaspora yet discovered from antiquity, yielding over eighty Greek and seven Hebrew inscriptions as well as numerous mosaic floors. Along the way to Pamukkale (meaning “cotton castle” as the city contains hot springs and white terraces of carbonate minerals left by the flowing water), our stops will include Philadelphia (Rev. 3:7-13) with its several mosques and ancient Christian churches, and Hierapolis (another famous site of hot springs) where Paul brought Christianity (Colossians 4:13). Tonight we’ll enjoy dinner and an overnight stay in Pamukkale.
Meal Plan : Breakfast, Dinner ( Hotel )

DAY 4    Pamukkale, Laodicia & Kusadasi
I know thy works, that thou art neither cold nor hot: I would thou wert cold or hot. So then because thou art lukewarm, and neither cold nor hot, I will spue thee out of my mouth… As many as I love, I rebuke and chasten: be zealous therefore, and repent. Behold, I stand at the door, and knock: if any man hear my voice, and open the door, I will come in to him, and will sup with him, and he with me (Rev 3:15 – 16, 19 – 20).
After breakfast, we’ll visit Laodicia, one of the Seven Churches (“Churches” in this context refers to the community of Christians living in each city, and not merely to the building or buildings in which they gathered for worship) which was chastised for being lukewarm. Laodicea is situated on the long spur of a hill between the narrow valleys of the small rivers Asopus and Caprus. Archeological remains near Laodicia still attest to its former greatness as evidenced by the relatively well preserved stadium, gymnasium, and theatres (one of which is in a state of great preservation, with its seats still perfectly horizontal, though merely laid upon the gravel). There are other buildings atop the hill and to the east the line of the ancient wall may be distinctly traced, with the remains of a gateway, colonnade and numerous pedestals. We’ll drive to Kusadasi (whose name comes from words meaning “bird” and “island” because the peninsula upon which it sits has the shape of a bird’s head as seen from the sea), a resort town on Turkey’s Aegean coast, for dinner and overnight. The stunningly beautiful area has been a centre of art and culture since the earliest times and its residential population of 50,000 rises to over half a million during the summer. Hotel in Kusadasi.
Meal Plan : Breakfast, Dinner ( Hotel )

DAY 5    Kusadasi & Ephesus
“Put on the whole armour of God, that ye may be able to stand against the wiles of the devil…. Having your loins girt about with truth, and having on the breastplate of righteousness… taking the shield of faith… the helmet of salvation, and the sword of the Spirit which is the word of God” (Eph 6: 11 – 17).
Today we visit Ephesus one of the Seven Churches in Revelation (Rev. 1:11), and for many years the second largest city of the Roman Empire ranking second only to Rome. While in the ancient city of Ephesus, we’ll look with wonder on many historically rich sights including the Temple of Artemis (Diana), the fountain of Trajan, the Baths of Scolastika, the Temple of Hadrian, the Library of Celsus and the Great Theatre capable of holding 25,000 spectators (used initially for drama, but during later Roman times for gladiatorial combats) where Paul preached and where the riot of the silversmiths occurred. We will walk along Arcadian Way where Mark Anthony and Cleopatra once rode in procession. We’ll return this evening to Kusadasi for dinner and another overnight stay.
Meal Plan : Breakfast, Dinner ( Hotel )

DAY 6    Kusadasi, Smyrna, Thyatira & Istanbul
[T]he heresies are at best novelties, and have no continuity with the teaching of Christ. Perhaps some heretics may claim Apostolic antiquity: we reply: Let them publish the origins of their churches and unroll the catalogue of their bishops… as the Smyrnaeans count from Polycarp and John, and the Romans from Clement and Peter; let heretics invent something to match this (Tertullian, circa 208 A.D).
As one of the principal cities of Roman Asia, Smyrna vied with Ephesus and Pergamum for the title “First City of Asia.” Today we’ll drive to Smyrna, rich in history and archaeology, to visit Mount Pagus once called the crown of Smyrna where temples ran along the lower slopes like a necklace on a statue (to use the terms of Aristides the orator). Here we’ll see the Church of St. Policarp, the oldest church in what is now called the city of Izmir. The Church represents ancient Smyrna’s role as one of the Seven Churches of Revelation. Saint Polycarp (after whom the church was named), was converted by John the Apostle, became Bishop of Smyrna, and was martyred by the Romans at age 86 in 155 AD at Kadifkale, which was atop the hill near modern-day Izmir. According to tradition, when they tried to burn Polycarp at the stake, the flames wouldn’t touch him so they finally stabbed him to death. Our next stop is Thyatira, in far west Turkey almost due east of Athens, and one of the Seven Churches of Revelation (Rev. 1:11; 2:18-29). Paul and Silas might have visited Thyatira during Paul’s second or third journey, although the evidence is entirely circumstantial as they visited several small unnamed towns in the general vicinity during the second journey. Finally, we’ll drive to Bandirma, a central harbor and transit point between Istanbul and Izmir, to catch the Fast Ferry to Istanbul where we’ll enjoy dinner and an overnight stay.
Meal Plan : Breakfast, Dinner ( Hotel )

DAY 7    Istanbul (Constantinople)
But unto every one of us is given grace according to the measure of the gift of Christ (Ephesians 4:7).
Our sightseeing tour of Istanbul, cultural, spiritual and economic hub of Turkey (and called “The City of Seven Hills” (like Rome!) because the oldest part of the city is alleged to have been built on seven hills), begins with a visit to the magnificent Topkapi Palace, home to the Ottoman Sultans for approximately 400 years (1465-1856) of their 624-year reign. The palace is a major tourist attraction containing the most holy relics of the Muslim world such as the Prophet Muhammed’s cloak and sword among many other treasures and antiquities including twelve thousand pieces of fine Chinese porcelain. The sight of cascading domes and six minarets of the Blue Mosque built in 1609 by Sultan Ahmet, will undoubtedly thrill us. These still dominate the skyline of Istanbul and the interior walls are covered with twenty thousand blue iznik tiles. We’ll also visit St. Savior in Chora, presently dating from the 11th century; but the first church on this site was built in the 4th century as part of a monastery complex outside the city walls of Constantinople which is the reason for the “in Chora” part of its name – meaning “in the country” in Greek. Inside, there are about 50 mosaic panels deriving from the New Testament and dating from about 1310, and most in excellent condition. We won’t to miss the Hippodrome of Constantinople (which had a capacity to accommodate more than 100,000 spectators for sporting events such as the quadriga chariot races during the Roman and Byzantine periods) and the Basilica of St. Sophia. Unfortunately nothing remains of the original Hagia Sophia, which was built on this site in the 4th century by Constantine the Great who was the first Christian emperor and the founder of Constantinople, a city he called “the New Rome.” The Hagia Sophia was one of several great churches he built in cities throughout his empire which have inspired
architects and religious leaders for over fifteen hundred years. We’ll enjoy dinner and another overnight in Istanbul.
Meal Plan : Breakfast, Dinner ( Hotel )

DAY 8    Depart for Home
Watch ye, stand fast in faith, quit you like men, be strong.
Meal Plan : Breakfast only